I had a morning safari ride at Khursapar on 3rd May 2018. Before entering the park I tried to gather information about the movements of all tigers and especially the cubs. I was informed that the previous day the dominant tigress named Durga was sighted near a particular water hole. But the cubs weren’t sighted at all. Hence, I had mixed feelings. Either the cubs were away at a secluded spot to avoid summer heat or they were going to be back with their mother today. And I certainly hoped for the later and better option.

After driving for about ten minutes, we saw a few stationery vehicles and all the guys pointing to a spot on our left side. When we reached there, we could see Durga resting in the shade. But she was about 500 meters away from us. It seemed she was in no mood to get up and come towards us. When I started scanning the area around with my binoculars, I was surprised to find two cubs at quite a distance from Durga. They too were resting in the shade. But the third chap was still missing.

I was happy that I could sight these little ones. But there was no way I could photograph them. I waited for few minutes to see if there is any movement from their side. And finally decided to move ahead and see if I can sight other tigers in the park.

I covered almost the entire park in next three hours or so. But I had completely run out of my luck. Forget the tiger sightings, I couldn’t even listen to any alarm calls. Dejected and frustrated, I again went towards the spot where I had seen those cubs. They were still there! And all three of them were together now! Already other vehicles had reached the spot and my vehicle was the last in a long queue.

In  next few minutes, one of the cubs got up and started moving in our direction. My forest guide told me that the cub is headed towards the water hole nearby. All vehicles immediately raced ahead and occupied the best possible positions near the water hole to see the cub. Being in the last vehicle, I had to accept my fate and stay slightly away from the water hole. The guide told me that the cub usually crosses the bushes and then emerges at the water hole from the other side. People from other vehicles had the best chance to see the cub from a very close proximity. But I would have to make do with my share of limited luck.

I tried to make the best of my available opportunity. I had all the space to move around in my vehicle and to position myself to get a clear view, though from a slightly distant position. Now I was just hoping that the cub emerges from the far side and I will be able to get a nice head shot of it raising its head from the bushes. I was ready with my camera, frame composition, etc. I was totally engrossed in the moment with anticipation of getting my dream composition. Then suddenly I felt an annoying tap on my shoulder. It was the last thing I needed for distraction. I looked towards my guide with clear frustration and anger on my face. He was pointing towards entirely different direction, he was pointing towards a few feet on my left side. The cub was right there. It had somehow avoided its regular path and come from the side where I was positioned.

The moment I saw him, I could not use my camera for few minutes! I had never before seen a tiger cub from this proximity. For me, observing the cub was far more precious than photographing it. I was in complete awe of this cub. It was gorgeous. And it was looking directly towards me, probably wondering why this guy is so close to him. Its eyes were focussed on my and I could feel the curiosity in its eyes. It sat on its two hind legs and kept looking at me for about three or four minutes. And then it gave a look as if to say, “forget it, I don’t like your face” and started moving ahead towards the water hole. Once it reached the water hole, it entered the water to quench thirst. The next expected step was it to immerse itself in the water and cool off. All the other tourists and vehicles were now in the best position to click images of the cub drinking water from a head-on angle.

This cub again surprised me! It drank water but didn’t sit in the pool of water. It again stared in my direction. And stepped few steps out of the water hole. It sat steadily and fixed its gaze on 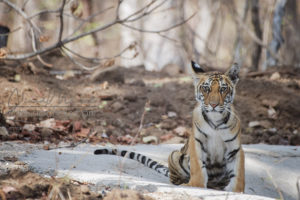 me again. All of these actions were totally new. First it didn’t take its regular path to reach the watering spot, secondly it didn’t lie in the water and thirdly, it was repeatedly watching me from different angles. It felt as if the cub could fathom the love and interest I had in it. And was trying to reciprocate in its own ways. Those eyes were simply trying to search and ascertain if I could be trusted as a friend. If we could start a bond that would stretch for years to come. This five month old little cub was literally communicating with me!

During this entire process, I wasn’t aware of my surroundings. I had even forgotten that I was carrying my camera! Finally, I regained my senses and tried to freeze the moment and the stare. I am unable to describe the feelings I had at that moment. It was so subtle that it can only be felt, it cannot be communicated.

This young friend of mine then turned its head backwards and growled a few times. It was probably letting its other two siblings know that all was well. And they too can now step out from the bushes. Very soon after that the second cub emerged from the same place as the first one and headed straight towards 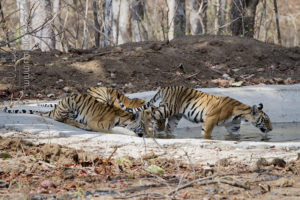 the waterhole. But it didn’t stop or look towards me. Finally, the third cub too emerged, but from the farther m

ost side, as always, and it too headed towards the water hole. Both the cubs were now quenching their thirst, but this chap was still holding its ground and occasionally staring at me. I was also constantly looking in to its eyes and not using my camera. Finally, it joined the other two cubs in the pool and stood standing in between them. All three of them were now drinking water together.

But this chap was clearly a leader. It was displaying all attributes of a leader, of being in-charge, of authority. It was providing protection to its siblings and was also demanding respect in return. I am sure, this particular (unnamed as yet) cub will soon establish itself as a dominant adult in and around Khursapar in coming years. And I will keep visiting here to meet my friend, to strengthen our bond.