I was out of town yesterday and wasn’t aware of our Prime Minister’s monthly ‘Mann ki Baat’ speech on the radio yesterday. But I could read the entire speech contents today at his website. As always, Modiji has delivered a very touching as well as thought provocative narrative. I totally support his three suggestions about utilizing the summer vacations to gain new experiences. And also about the VIP culture in our country. My salutations to Modiji. We have not had a leader in the past who could connect with the masses for such socially relevant causes.

Modiji also mentioned about the book titled “Save the Sparrows” by Mr Jagat Bhai. Modiji further emphasized that “It our country, we are traditionally imbued with a sense of symbiotic co-existence with animals, birds and nature yet it is necessary that collective efforts in this regard should be emphasized.” It is this particular aspect that I wish to elaborate further upon today.

Respected Modiji, me and many like-minded people like me are trying our bit in nature, bird and wildlife conservation with our meager and limited resources. We also try to create awareness about importance of conservation of all the species and to increase the green cover. Inspite of putting in sincere efforts, writing letters to concerned officials, conducting lawful yet silent protests, etc we are never heeded to. Neither are we ever consulted with while formulating any major decision in such matters. Isn’t this an irony?

Since 18th of April 2016, the Forest Department has been unable to trace and track and an iconic male tiger popularly known as Jai. He had established his territory in Umred Karhandla Wildlife Sanctuary (UKWLS) near Nagpur in Maharashtra. He was also radio collared twice before his disappearance. Its been a year but none of the officials have been able to provide any details about Jai’s whereabouts. The officials who were tracking the tiger through its radio collar have been maintaining silence which may put even a monk to shame! Aren’t we as concerned conservationists and citizens of the country entitled to ask about the missing tiger when the cost of radio collaring was done through the government money? And when we have been running from pillar to post, why hasn’t any one yet come out with any clarifications? I wish to point it out here that in all probability Jai is already dead! He was either poached or he was electrocuted in one of the farms on the periphery of UKWLS. But if the details of his death are made public, too many heads will roll in various departments. And hence probably, it is kept under the wraps.

Before his death Jai had sired two male cubs who were named as Bittu and Sriniwas. Both these cubs were also radio collared eventually. The irony is that both have been untraceable since long. And couple of weeks back, the radio collar attached to Sriniwas was found near a small town called Nagbhid in Maharashtra. A thorough search operation was mounted to trace the tiger. And few days back, the forest department officials revealed that the tiger was dead and buried in a farm near Naghbid. The tiger had died due to electrocution in the farm. And the farmer along with his son didn’t bother to inform any officials but buried the tiger in his farm. Photo of the tiger’s body being exhumed have been doing rounds in the local print media and also on social media. The farmer father-son duo has already confessed their crime and they have also got bail on the same day. 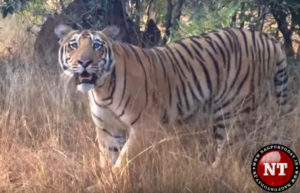 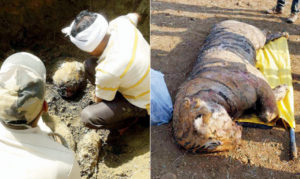 This entire episode throws light on various issues. Since Sriniwas was radio collared, it is clear that the officials had a fair idea about its movements at large. Then, why didn’t the officials sensitize the farmers and villagers around its movement tracks? Why didn’t the officials liaise with their counterparts in the state’s electricity distribution company to check illegal electric connections? Why didn’t the forest officials inform other government officials like the BDO, the District Collector, the Sarpanch, etc to be on a look out for any probable eventuality like electrocution, cattle kill or man-animal conflict? Or is it that just radio collaring the tiger is sufficient enough? Isn’t there a need to track the animal and to protect it? More so, when the case of missing Jai is still going on?

There will be some who will argue that the farmer needs to protect his crop yield from herbivores who often barge in to the farms. I too support it. But for the sake of protection, can a farmer use illegal electric connections and spread live wires on his land? If the farmer was so worried about the nuisance and threat of wild animals (both herbivores and carnivores), did he talk about it to any official like Sarpanch, BDO, Forest Department official, District Collector, MLA, etc? And when the tiger had died, the farmer decided to bury it without letting anyone know anything about the whole incident. Probably, his reasons were of protecting and looking for well-being of his family in case he is imprisoned. Can this reason be ever justified?

Respected Modiji, in my opinion, a strong lawful and legal action needs to be taken against the Forest Department officials, Electricity Distribution company officials and the farmer. Else this trend will always continue. We will keep losing the extremely endangered national animal. And we will also keep losing various other wild herbivores. In some cases, we may also loose innocent human lives who may step upon those live electric wires.

Respected Modiji, as you have already mentioned that we traditionally value the sense of symbiotic co-existence with animals, birds and nature, isn’t it equally important to act against the persons and powers who are acting against this tradition and thus causing irrecoverable loss to our animal kingdom? I hereby request you to please look in to the matter and help all of us in protecting our vibrant wildlife.