Baras – the princess from Khursapar

On 15th April 2017, I had a day long safari ride in Khursapar range of Pench, Maharashtra. I had never been on a day long safari before. I knew it was going to be a rigorous task considering the summer heat. But I was equally excited since I had an opportunity to spend a longer duration of time in the park. Luckily, I had a very good driver in Durgesh. He was far more experienced than the other guides.

After entering the park, we headed towards a spot where a tigress named Durga had hunted a spotted deer a day before. We could hear alarm calls of herbivores around that spot. But even after waiting for about thirty minutes, we were unable to sight a tiger. We decided to move to a different location.

When we reached a location called as Chipgota waterhole, we came to know that a tigress was sighted at the same place for about 30 minutes and had left the place shortly before we reached the spot. It meant, while we were waiting to get a glimpse of Durga, another tigress was giving poses to the tourists! I couldn’t feel more disappointed and dejected!

We drove further from Chipgota and saw numerous vehicles standing still. We too realized that people stationed ahead of us were able to see a tiger resting in the bushes at some distance. I desperately wanted to reach the front to see the tiger for myself. But there was no way to reach the desired spot. Suddenly, Durgesh, my driver, started the ignition of the Gypsy and turned the vehicle around. He had decided to return to the Chipgota waterhole. I got angry and made him realize it too. I specifically told him that we want to stay at the same location and be patient to sight the tiger. But he had other plans. He insisted to be near the waterhole. He was certain that the tiger will reach there in about 15 minutes. Surprisingly, none of the other drivers or guides shared his opinion. 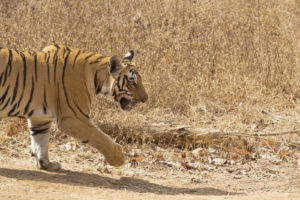 I couldn’t believe the tracking skills of Durgesh and also that I was so lucky to be at a spot without any other vehicles. Durgesh had indeed made my day.

Baras (the sub-adult tigress) positioned herself in the waterhole and stared straight towards me. I felt as if I was able to communicate with her on a very subtle level. She was repeatedly looking towards us and then checking in other directions too. And all the while I was able to get good images of Baras too. Now something about her unique name. Just above her left eye, there’s a mark which resembles the digit 12. In the local tribal language 12 is pronounced as BARAS. And hence the name. 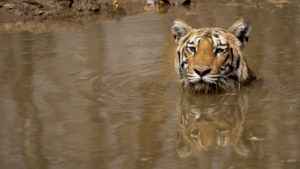 Eventually many other vehicles came and joined us in observing Baras from close proximity. She was aware of the large number of vehicles and people around her. Yet she was comfortable and not scared at all. She was either lapping up water to quench her thirst or just cooling off in the water. She rested there for well over an hour and finally left the spot and moved downhill in to the thick bushes.

At present she is still with her mother named Durga. But in coming months she will venture out on her own to establish her territory in the park. I am of the opinion that she will hover near Chipgota itself. And may be in a year she will deliver her first litter too.

There are certainly good time ahead in Khursapar range of Pench Maharashtra. And I am bound to keep visiting and keep looking for Baras. I just cannot miss the process in which the princess turns in to the queen.