There are three main elements that need to be considered when playing around with exposure by calling them ‘the exposure triangle’.

Each of the three aspects of the triangle relate to light and how it enters and interacts with the camera.
The three elements are:
1. ISO – the measure of a digital camera sensor’s sensitivity to light
2. Aperture – the size of the opening in the lens when a picture is taken
3. Shutter Speed – the amount of time that the shutter is open
It is at the intersection of these three elements that an image’s exposure is worked out. 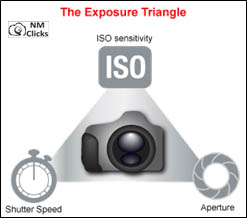 Many people describe the relationship between ISO, Aperture and Shutter Speed using different metaphors to help us get our heads around it. Let me share one. A quick word of warning first though – like most metaphors – these are far from perfect and are just for illustrative purposes:

Imagine your camera is like a window with shutters that open and close.
Aperture is the size of the window. If it’s bigger more light gets through and the room is brighter.
Shutter Speed is the amount of time that the shutters of the window are open. The longer you leave them open the more that comes in.

Now imagine that you’re inside the room and are wearing sunglasses. Your eyes become desensitized to the light that comes in (it’s like a low ISO).

Ok – it’s not the perfect illustration – but you get the idea.

Bringing It All Together

Mastering the art of exposure is something that takes a lot of practice. In many ways it’s a juggling act and even the most experienced photographers experiment and tweak their settings as they go. Keep in mind that changing each element not only impacts the exposure of the image but each one also has an impact upon other aspects of it (ie changing aperture changes depth of field, changing ISO changes the graininess of a shot and changing shutter speed impacts how motion is captured).

The great thing about digital cameras is that they are the ideal testing bed for learning about exposure. You can take as many shots as you like at no cost and they not only allow you to shoot in Auto mode and Manual mode – but also generally have semi-automatic modes like aperture priority and shutter priority modes which allow you to make decisions about one or two elements of the triangle and let the camera handle the other elements.