After I got my camera, I was always trying to learn the finer nuances of photography. Understanding the camera controls and settings, reading books, composition rules, understanding light, handling different lenses were all part of my exploration method. Whatever I tried to create wasn’t pleasing my own eye and heart. Rather, I was always unable to create a picture which I had in my mind. I had started observing photographs of other people and tried to decipher the reason why it is appealing to me. I could not engage or talk with those photographers since I lacked the courage to do so. I had a very low self-esteem when it came to photographical skills.

Around that same period of time I came across an opportunity to join a photo tour to Kanha National Park. The tour was to be mentored by Dheeraj Paul. All the other members were going to be unknown to me. And I also had an opportunity to learn a lot from Dheeraj. I grabbed this opportunity. Today I can confidently say that it was the beginning, the stepping stone, the first step of my pursuit in photography. It was indeed a beginning of a life long journey.

During an early morning ride in the park during that cold winter, we were heading to spot a tiger through the tall Sal trees. Somewhere on the way, I was struck by the sight in front of me. A path was meandering though the
thick and tall trees, entire vicinity were blanketed in fog and mist, and the sun rays were making its way through the foliage towards the ground. This sight made me forget the cold weather. I had forgotten the fact that my fingers were almost numb. In fact, I had forgotten everything else around me. I was aware only about the picturesque beauty in front of my eyes. I had already painted its picture in my mind. And I wanted to paint a similar picture through my camera. 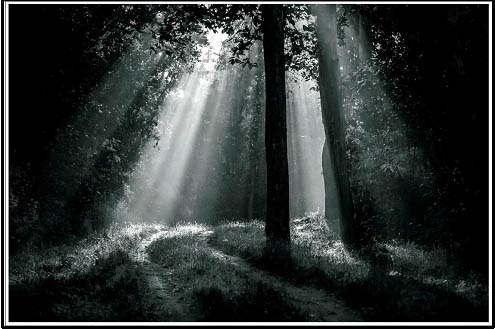 In order to capture the true essence of the moment, I had to use a narrow aperture. It was necessary to get that high contrast depth in to the image. At the same time, I could not use a slower shutter speed as it would have resulted in slightly blown out highlights on sun rays. I also needed to reposition myself without stepping out of the vehicle to get a good composition and hence had to request my driver the move behind by few meters.

I made this image in a very short time. My fellow photographers weren’t willing to spend much time at that particular spot. They were urging me to go ahead soon in order to sight a tiger at a different location. But for me, making this image was, if not more, certainly equal to the pleasure of making an image of a rare sight.

Those soft yet warm sun rays piercing through the tall trees had illuminated my path. The less trodden path denoted my then state of mind, I had myself stepped on a path of creative journey which not many in my family or close friends had stepped on. The curve ahead on the path was indicating a different direction than my regular pursuits. The treasures and joys ahead on this path were hidden in thick forest cover and inadequate light. The strong and tall tree through whose leaves sun rays were falling down to guide me was symbolic to a mentor who will always facilitate and guide me on this new journey.

The journey began with this particular image. This was the first image I had “made”. All the images I had clicked before this were only “taken”. The journey of “making images” is still on. It will always remain on going. Many blind turns have come and many more are yet to come, the path too is still less trodden and less used. But the pleasures and joys on this journey are indescribable. Those can only be experienced.